As a resident of central London, I don’t really understand darkness. Light pollution from the city means that, even in the dead of night, the ‘dark’ isn’t really that dark at all. That’s probably the same for a lot of us today – unless, of course, you live in the depths of the countryside.

What I find important to remember when reading this passage is that ‘half-dark’ wasn’t really a thing for those to whom John was writing. Light pollution didn’t exist, because electricity didn’t exist. ‘Dark’ and ‘light’ were two polar opposites; there was no middle ground.

This is the stark contrast that John is drawing with this passage. When it comes to being a disciple of Christ, and to loving your brother or sister, there is no middle ground. You are either in or you’re out. You’re either in the light or you’re still in darkness, for you hate a brother or sister. As Bishop Westcott writes: ‘indifference is impossible; there is no twilight in the spiritual world.’

We cannot be ‘in the light’ whilst we are harbouring negative, critical, or compassionless thoughts or attitudes towards fellow believers. Light and dark cannot exist in the same place. Hate = darkness, love = light.

I find this hard. Because sometimes (read: often), other Christians are difficult. They say the wrong things, they act in ways which hurt us, they are sinful… just like us. But John, along with other New Testament writers, makes clear that being a Christian is all about being part of the community of faith. Brothers and sisters who love one another… despite our myriad failings and flaws. Love among Christians is a true touchstone of discipleship.

What does this look like for you as you begin this week? With whom do you need to reconcile? Where might you be harbouring bitterness towards a fellow believer? Did someone say something inconsiderate to you over coffee after church yesterday? Have you had a falling out with someone you serve alongside? Disagreed with something your pastor said in their sermon?

Living in Christian community means loving our brothers and sisters despite their flaws, and choosing – sometimes daily – to forgive them when they hurt us. It is only then, John says, that we will be no longer ‘blinded by darkness’, but walking fully in the light. 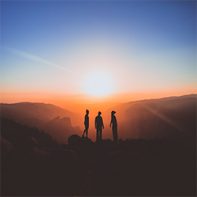