Being Human in an Age of AI | Connecting with Culture

What does it mean to be human? This is a question which AI and robotics is raising with new intensity.

Throughout history, we have tried to understand ourselves by reference to the leading technologies of the age. In the 18th century, for example, the French philosopher Diderot compared the human to a precision clock: ‘his heart is the mainspring, in his head are the bells, complete with little hammers… and the soul is the tiny figure on the top listening to the music of the chimes’.

In this age of information technology and machine intelligence, then, we should not be surprised that humans are being increasingly seen as ‘information processing machines’. In Life 3.0, Mark Tegmark notes that human life can be seen as a ‘self-replicating information processing system’. To philosopher Daniel Dennett, ‘we’re robots made of robots made of robots. We’re incredibly complex, trillions of moving parts. But they’re all non-miraculous robotic parts.’

The ‘information processing machine’ is becoming the dominant paradigm by which we understand our own humanity. But it is much more profound and subtle than just a metaphor; it is a way of perceiving. Technology brings its own ‘reality distortion field’ – it changes the way we see the world and our own human nature.

Of course, there is a certain truth behind all this. There are many aspects of our human functioning that can be seen as machine-like. Mechanistic thinking has been extremely successful in human physiology, genetics, cognitive psychology, and so on. There are certain aspects of being human that are like a machine. But to say that the human is a machine is philosophical and theological nonsense.

So, what does it mean to be human? And in a world in which machines will increasingly take on the roles that humans have played, what are human beings for?

The challenge for those of us who uphold the historic Christian faith is how to articulate and defend a Christian anthropology in the face of these mechanistic challenges. Yes, we are embedded in physical materiality with all its machine-like characteristics, but we are also persons, mysterious and unique reflections of the Godhead. Persons created for the exploration and fulfilment of the cosmos and for union and communion with one another and with our Creator. It’s a higher calling than any information processing system…

Professor Wyatt will be joining us for our upcoming event ‘Rise of the Robots: Artificial Intelligence and Human Identity’ on Monday 9th July.

Professor John Wyatt
John Wyatt is Emeritus Professor of Neonatal Paediatrics at UCL. He is currently leading a research project into the social and theological implications of advances in AI and Robotics at the Faraday Institute, Cambridge. 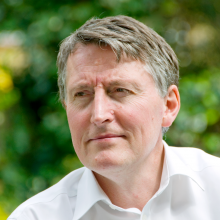