Back to Making Disciples for Everyday Life

How could we maintain a whole-life focus?

Those of us who’ve been around the church scene for a while can be rightly sceptical about perspectives and practices that are fashionable for a season, but get discarded when the next big thing hits. If whole-life discipleship is biblical, and of ongoing importance, how do we stop it from being a passing fad? How do we embed it into the DNA of our churches?

‘Nobody’s going to shout at you if you’re not doing this,’ Ken Benjamin (Senior Minister) explains. ‘People don’t call you to say, “You’re not helping me with an issue that I’m going to face tomorrow morning,” but they will call you when there is a problem in church life, or if they face a major pastoral issue.’

According to Ken, and to Ellen Wild (Minister), one of the keys to keeping it going is keeping it fresh. Christmas rolls around every year, and each year we find new ways, new angles, new language to tell an ancient story in a new way. Likewise, when it comes to empowering God’s people for their daily lives, year after year, ‘it requires our best creativity’, says Ken.

New voices help to keep it fresh: a member of the congregation preaching, a visiting speaker, anyone who can express the same core message, but with their metaphors, their language, their experience, their emphases.

Sharing new stories is another way to inject fuel into the engine. This might be you telling the stories, or it might be the people involved. Either way, when Christians are taught and encouraged to recognise ways they are already being fruitful, and new ways in which they might be fruitful, the congregation won’t have to keep listening to the same whole-life story from eight years ago! With a willing ear and the right questions, you will discover myriad ways God is at work through members of your church during the week.

The week before I spoke to Ken, Chris (a long-term member and former administrator at the church) shared a testimony in the morning service, alongside her colleague Becky. As well as seeking to model godly character in her workplace by not gossiping, by doing her work in a way that glorifies God, and by cultivating a culture of honesty and more besides, Chris had been answering lots of Becky’s questions about Christian faith. She’d even prayed for Becky one morning in the office when no one else was about, as Becky had been suffering from chronic pain due to a dental mishap. After a number of conversations, Becky came along to some services at CBC. Then, at their Easter service, she committed her life to Jesus.

Not all stories will be ‘big’. They certainly won’t all have a happy ending. They may not even have an ending at all. But when the congregation hears of new ways that God is at work out in the world through them, it helps them keep going.

Recognising the spiritual value of what everyone does during the week is not a programme… it’s part of the culture.

But what about you? What will keep you – you the worship leader, you the curate, you the pastor, you the PCC or Leadership Team member, you the vicar, you the area coordinator, you the preacher, or whoever you are – motivated to go the distance?

Motivation is derived both internally and externally. When you talk to Ellen and Ken, their passion for making whole-life disciples is striking. So, what helps them keep a whole-life focus high on the agenda?

It is said if you have a big enough ‘why’, you will always find a ‘how’. Ellen and Ken exemplify the truth of this adage. There is a burning in their souls; a burning fed by Scripture, the Spirit, a love for those who not know Jesus, and an awareness of the impact being made by those who do. ‘I want to see the kingdom grow,’ Ken shares. ‘It’s about breaking [the mission] down into smaller parts. The smaller parts of the church are the individual believers.’ Ken is passionate to see these individual believers equipped and released for fruitful service – that’s what keeps him ‘fired up’.

Ellen adds, ‘If I can look back on my time and think there are people in the kingdom who otherwise wouldn’t have been had it not been for the people that I had encouraged and mobilised, that’s a job well done!’

From experience, though, we know we can be passionate about something but that passion doesn’t always result in sustained action. That’s where systems, habits, and reminders help us to keep walking the path; things that are outside of ourselves.

As a church, they publicly and regularly state three ways they are committed to local mission: Christians Against Poverty, missional communities, and whole-life discipleship. This means whole-life discipleship gets mentioned a lot – in conversations with new people, from the front, in their communications, and so forth. If you keep saying that you do something, you are more likely to do it! People notice if you don’t. You notice if you don’t.

Whole-life discipleship regularly makes it onto staff and leadership team meeting agendas. Ken is sometimes invited to speak at other churches, or gatherings of church leaders. He finds regularly talking to others about whole-life discipleship – with those inside and outside his church – acts as a reminder and even a form of accountability.

As a church leader, having your own frontline also helps keep the connection between Christian faith and daily life on the front burner. Ellen has two boys at school. Over time she’s developed great friendships with other mums who have kids the same age as hers. ‘I’ve made a commitment not to let my friendships with other mums be pushed right down the agenda,’ she tells me. ‘In the past, if I had time after church meetings and family stuff, then I might go on a mums’ night out. But now I make it a priority to go.’ Her commitment to and her experience on her frontline keep her excited about the opportunities and realistic about the challenges of life on the frontline.

Recognising the spiritual value of what everyone does during the week, and equipping people for those times and places is not a programme CBC runs. It’s part of the culture. This meant that when Chris moved from her church-based role into a business-based role, nobody asked ‘why on earth would you want to do that?!’ They know that the Great Commission is everyone’s work, and anyone can do it, anywhere. It’s not the preserve of paid church workers.

Ken said if you don’t equip people for their day-to-day lives, nobody is going to shout at you. But Chris said if the church leaders did stop doing that, there would definitely be a few knocks on their door.

Some things to try

Share testimonies
Keep an ear out for recent examples of fruitfulness within the congregation, and (with their permission!) share them.

Invite us over
Whatever stage of the journey you’re at, consider inviting someone from the LICC Church Team to speak at a church service or event.

Add it to your diary
Commit to having whole-life discipleship as a recurring item on agendas for leadership and/or whole church meetings. Review what progress you are making, and what some next steps might be.

Share is with others
Tell someone else about whole-life discipleship. When you gather with other church leaders, tell them about what you’re doing, and why you think it’s important.

Some things to look at

Learning Hubs
Consider joining an LICC-run Learning Hub. Over the course of the year, these eight sessions will help you and your team think through how to implement a whole-life approach to disciplemaking across the whole church. 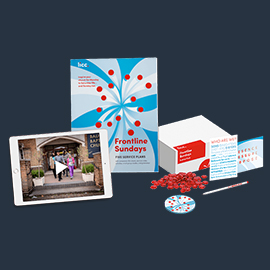