Discover something new this Friday

‘I want to be happy, not just happy enough.’ Such is the exasperated sigh of Jenna, our heroine. She’s stuck. Stuck with an abusive husband, and stuck in a dead-end job.

This might appear excessively bleak for what claims to be a romantic comedy, but it’s the opening scene of Waitress, currently showing on London’s West End (spoilers incoming). This is a life of dissatisfaction, of yearning for more.

It’s little surprise, then, when our protagonist attempts to move beyond both her sources of misery. She has an affair with her gynaecologist, and resolves to enter a pie-making competition to escape the monotony of her job. The search is on to find happiness.

However, these routes prove unsuccessful. The affair ends and the competition is never entered. It looks like happiness will continue to elude her. That is, until the play’s conclusion where, classically, it all turns out great and she gets her own pie shop to run with her daughter. As theatregoers, we want the story to end there.

What about when another shop opens nearby and makes slightly more money due to their slightly more talented chef? Or when it seems her fledgling business will fail? Or when her relationship with her daughter faces strain?

Though Jenna is driven by more urgent needs than just a desire to prove herself, for most of us it’s never long before the haunting question comes back. ‘Are you happy enough?’ The desire for more – striving for the elusive ‘enough’ – doesn’t go away, no matter how successful we get. The more you feed the comparison beast, the hungrier it gets.

If we find our ultimate satisfaction and worth in what we can do, there will always be another person’s ability, achievements, or status to compete with. Crisis is only ever one failure away.

What if, instead, we flipped our starting point. What if our identity wasn’t found primarily in who we are or what we’ve done, but in whose we are, and what he’s done. Identity that isn’t achieved, but received.

And that desire for more? It’s not in itself a bad thing. As C.S. Lewis writes, if ‘nothing in this world can satisfy, the most probable explanation is that we were made for another world’. We just need to recast our desire for more as a desire for that which will truly satisfy. For more of the kingdom. And for more of the King. 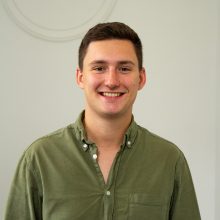