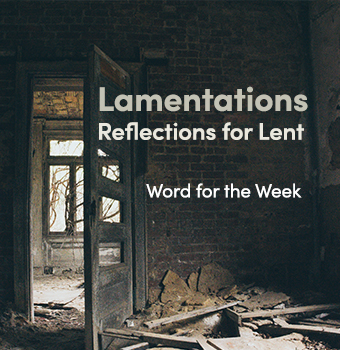 ‘How deserted lies the city,
once so full of people!
How like a widow is she,
who once was great among the nations!
[…]
“Look, LORD, on my affliction,
for the enemy has triumphed”
[…]
“See, LORD, how distressed I am!
I am in torment within,
and in my heart I am disturbed,
for I have been most rebellious.”’
Lamentations 1:1a, 9b, 20

How acquainted are you with grief?

Perhaps it is your closest friend right now. Perhaps it has stalked your life for years – or maybe it is a new companion, an unwelcome visitor, an unexpected disruption to your world. Perhaps grief is held somewhat at a distance – an occasional guest, one you have not yet been forced to know.

Lamentations is a resource for a time of crisis; a way to give words to a pain that feels unspeakable.

Throughout Lent, we will be journeying through this description of Jerusalem’s defeat and the destruction of the temple in the 6th Century BC. The city has been besieged by the Babylonians, with some people carried into exile and others left in the ruins.

The first poem personifies the city of Jerusalem as a widowed and abused woman. Its first half reflects on the ransacked city from the outside, with the second half giving voice to Jerusalem herself.

Jerusalem is clear about what has happened: she has rebelled against God’s word and, after countless warnings, God has punished her wrongdoing and handed her over to her enemies. She has been destroyed.

Yet still she cries out to God: ‘Look, LORD, on my affliction, for the enemy has triumphed.’ Her people still bring their pain to God – despite acknowledging that they have been ‘most rebellious’, and therefore God is fully within his rights to punish them.

As we read, we must remember that not all suffering is a punishment from God. Often, it is just the reality of living in a broken world. As such, none of the chapters – nor the book as a whole – end with hope. We are forced to dwell in the brokenness, to sit with the suffering. Such is the reality of life, of grief, of despair – it is not easily answered, nor does it always come to a neat conclusion. 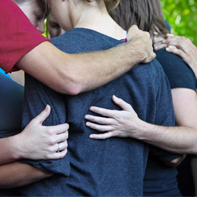 Sign up to Word for the Week and we'll also treat you to a monthly round-up – our best content to your inbox, with occasional personalised emails too. By entering your details and pressing ‘submit’, you agree to our privacy policy