Les Mis and the Saintly Entrepreneurs | Connecting with Culture

Life is not a highlights reel. And nor are the great novels.

Inevitably, of course, screen and stage versions of big books like Victor Hugo’s much-adapted Les Misérables tend to focus on events that drive the narrative forward, moments of deep ethical challenge, intense emotion, and high personal jeopardy. But Hugo’s ambition for his tale of the gospel-fuelled transformation of Jean Valjean from disdained felon to selfless citizen went far beyond showing the triumph of godliness under extreme pressure. Rather, Hugo, whose faith position is disputed, is interested in portraying the possibility of radical consistent godliness worked out in everyday life.

Indeed, the novel does not begin on the corpse-strewn fields of Waterloo, as in the recent BBC adaptation, nor in the prison hulks of the 2012 film based on the musical. It begins with a fifty-page portrait of the entrepreneur Bishop of Digne, a praying priest with a joyously creative ability to divert resources to the poor. He gives away 85% of his income; he gives up his palace so the town can have a larger hospital; he discovers he is due a transport allowance, gives the money away, and carries on riding his donkey.

Hugo gives us tale on tale of his creativity, his commitment to all his people, and his generosity, so that when he forgives Valjean the theft of his silver cutlery it is no surprise to the reader that he offers him the candlesticks. The act is not one extraordinarily good deed in an otherwise undistinguished life, rather it is one extraordinarily good deed in a life daily characterised by extraordinary goodness. Hugo doesn’t only suggest that we are all capable of great acts but that we might all be capable of living greatly.

And so Valjean, in his calling to business, becomes as exemplary in godly generosity as the bishop who ‘bought his soul’ with the candlesticks. His factory is open to anyone who would work, his entrepreneurial acumen is directed towards the burgeoning shalom of the previously impoverished town, and his wisdom to the resolution of conflicts. Indeed, Hugo directly compares bishop and businessman: the latter only slightly less revered than the former.

Tests, temptations, and failures come to us all. Hugo reminds us that the gospel not only promises eternal life but life in Christ that can transform our everyday living into something compellingly beautiful – whatever our calling.

Sign up to Connecting with Culture and we'll also treat you to a monthly round-up – our best content to your inbox, with occasional personalised emails too. By entering your details and pressing ‘submit’, you agree to our privacy policy 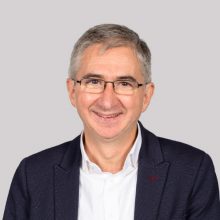