The disciples came to him and asked, ‘Why do you speak to the people in parables?’ He replied, ‘The knowledge of the secrets of the kingdom of heaven has been given to you, but not to them… But blessed are your eyes because they see, and your ears because they hear.’

How, we might ask, does God exercise his kingly power in the world? And Jesus responds with stories of a farmer sowing seed, of yeast in a lump of dough, of treasure hidden in a field, of a net full of fish, of a man hiring workers for his vineyard, of a wedding banquet, of ten bridesmaids… Puzzled? Jesus’ parables are bound up with his announcement that God has begun to exercise his longed-for reign on earth – but it’s not always easy to see the links. Even the disciples found it difficult to connect the dots between the one and the other.

Jesus’ parables are often thought to be down-to-earth stories illustrating points which people would readily understand. But in many cases, instead of making the message clearer, they appear to make it harder to get! And there lies the challenge: implicit in every parable is a question – are your ears and eyes open to what God is doing?

Jesus’ answer to the disciples’ question gives us a clue – maybe even the key – to what’s happening when he teaches in parables. The disciples are distinguished from the crowds not by their instant and intuitive understanding of the parables, but by their seeking of explanations, and by having the ‘secrets of the kingdom’ revealed to them. So it is that they are ‘blessed’, says Jesus, not because they are cleverer than others, or more deserving than others, but because God has given to them what he has not given to others – just as God granted Daniel access to the divine ‘mystery’ that the Babylonian sages were unable to understand.

In this case, the disciples witness God fulfilling his promises of salvation, even though it’s not happening like most people thought it would or should. One day God’s rule will embrace the whole earth, but he is already at work in unexpected ways – and each of the parables in Matthew 13 illustrates something of this tension between the ‘already’ and the ‘not yet’ of God’s reign.

For us too comes the challenge and incredible privilege of discerning God at work in the everyday, perhaps in quiet and unanticipated ways. Now as then – for those blessed with eyes to see and ears to hear – it’s possible to detect the extraordinary in the ordinary. Where will you see evidence of his reign today? 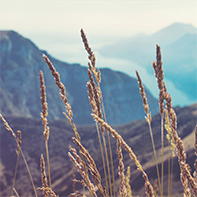