To this you were called, because Christ suffered for you, leaving you an example, that you should follow in his steps.

‘He committed no sin,
and no deceit was found in his mouth.’

When they hurled their insults at him, he did not retaliate; when he suffered, he made no threats. Instead, he entrusted himself to him who judges justly. ‘He himself bore our sins’ in his body on the cross, so that we might die to sins and live for righteousness; ‘by his wounds you have been healed.’ For ‘you were like sheep going astray,’ but now you have returned to the Shepherd and Overseer of your souls.

I passed through the security gate and found a spot in the dusty car park of a cereal factory on the outskirts of Cape Town. Cape Town is a beautiful city, but this part was not. Tourists don’t go there; the rich don’t buy holiday homes there – it’s the place where stuff gets made. As I got out of my pick-up and headed to reception, I did a double take. ‘What on earth?’ Strolling around the edge of this drab, industrial parking area was a majestic antlered-beast, which I learnt from the receptionist was a gemsbok. ‘Gemsbok, what are you doing here?’

In 1 Peter 2:13-3:7, Peter covers some pretty unglamorous stuff: the difficulty of living under suspicious rulers. The drudgery of slavery and the dread brought about by violent masters. The awkward dynamic in marriage when one worships Christ, while the other still worships idols. This was the stuff of everyday life that Peter’s readers were dealing with: the messy, the futile, the ugly. In this gallery of the daily grind Peter chooses to hang a beautiful portrait of Jesus. ‘Jesus, what are you doing here?’

Jesus is the one who saves us from sin and death. In his body on the cross, he ‘bore our sins’. He was fatally wounded that we might be made completely whole. Only he can bring lost sheep back to their true shepherd. For this reason, we worship Jesus now, with the whole of our lives.

But his death is not just an event in history to look back on in wonder. Instead, it lays down the pattern for how we should live in every area of life. These first Christians faced the pain of rejection and insults. Jesus did too. But ‘when they hurled their insults at him, he did not retaliate; when he suffered, he made no threats. Instead, he entrusted himself to him who judges justly’ (2:23). Despite all the pain, misunderstanding, and humiliation, not one bad word passed through his lips. This is the example we emulate; these are the footsteps we follow.

This is an extract from our NEW 22-day journey through 1 Peter, beginning 6 November. Sign up here. 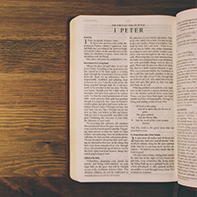