The one about the night knight

‘Thanksssh Pawwl,’ John shlurred through his 9-pint, 5-shot stupor, just sober enough to be grateful to the man who had somehow got him back home from wherever he had been, and up the stairs, and into his bed, and who, he would discover that afternoon, had removed his shoes.

Except that the person who’d helped him wasn’t Pawwl. Or even Paul. It was Tim. And it wasn’t an accident that it was Tim. In fact, Tim had been anticipating this moment, or at least one very much like it, for a couple of years.

Maybe it was having that year off after school that gave him space to think about what kind of life he wanted to lead when he went up to uni. Maybe it was the fact that his mum had constantly gone to work asking herself, ‘How am I serving the Lord here?’ Maybe it was the experience of driving a VW camper van with three of his mates through what turned out to be a Serbian minefield that concentrated his mind on the purpose of life. Whatever it was, in that gap year before uni, Tim asked himself the rather countercultural question: ‘Is uni right for me, or just what I do next because that’s what people with good A levels do?’

And Tim didn’t just ask himself the question. He asked God.

And God, he was convinced, had given him an answer, and a passage from Ezekiel. ‘I have a purpose for you in this next season. This uni is a valley of dry bones, physically alive but spiritually dead, and I want you to call them back to life.’ That conviction led Tim to think about how to live his life for Christ at uni.

He quickly figured out the more obvious things. You don’t want to be in the maelstrom of freshers’ week, five pints in, with Rihanna pumping through the speakers, and an increasingly attractive woman swaying in your arms before you ask yourself, ‘How do I want to live?’

Tim saw it coming. And planned for it. And he kept on asking himself questions: what would it look like if Jesus was living in this hall, if Jesus was in this seminar, if Jesus was playing midfield in this team?

And so when he signed up for a second-year house with six others before most of them knew each other’s surnames, he asked himself the question: what would it look like if Jesus were living in that house? He thought about the ways he might serve his future housemates, and where the boundaries would be – willing to clear up after others sometimes, but definitely not seventy times seven times. And he anticipated the consequences of the uni’s drinking culture, deciding that he would be the one who would stay on till the small hours, even after the jokes had long ceased to be funny, and make sure everyone got home. The reality was that over the year Tim had to help every one of his six male and female housemates get home.

In their first term in the house, a host of medical issues arose. In one week alone, they had an ambulance with them three times for three different people. There were two other hospital trips, and just general poor health. At the end of the term, Tim was the last to leave and he decided to prayer-walk the house, praying in the communal areas for joy and friendship and care, praying at the door of each housemate’s room for protection for their health, for their progress at uni, for their salvation. The following term there were no ambulances at their door, no trips to the hospital, not even any trips to the doctor.

In the hockey club, Tim played the long game. He decided to invest in his teammates, to enjoy the season, join in the nights out, stay sober, celebrate well, commiserate well, serve, and see what God would do. And indeed in his final year the inebriation culture had shifted a bit and, because of Tim, the new recruits realised that they didn’t have to drink themselves into the day after tomorrow to be part of the team.

Now Tim’s uni had, like many unis, a number of curious customs. One of them was to have a college wife or husband: someone you get on with but for whom no romantic embers glow in the depth of your heart. You propose, and in the second year you become ‘mum and dad’ to a first year ‘baby girl and boy’. It’s basically a mentor system. Tim proposed to Becca, one of his housemates-to-be, who he’d been friends with since freshers’ week. It was a mixed marriage – there were very few Christian women in Tim’s college. Becca was kind of a girly-girl, playful, joyous, fun-loving but with a steely passion for social justice, a passion that Tim shared. She was particularly concerned about gender equality, whilst Tim was involved in a whole range of social justice campaigns including International Justice Mission’s anti-slavery, anti-human-trafficking campaign. Over time, Tim was able to communicate the connection between following Jesus and his own commitment to the poor, the voiceless, and the marginalised.

Time passed. And then midway through the second year, Tim got a text from Becca. ‘When you back?’ Tim replied. Becca texted again, ‘You’re a Christian, right? I’d love to talk about it. Why is it you give your life to this?’

For Tim it was like that moment in Acts 8 when the Ethiopian eunuch invites Philip to explain who Isaiah 53:7–8 refers to. You don’t get a much clearer opening to share the good news. Like Philip, Tim took it.

Becca’s conversion wasn’t quite as swift as the eunuch’s. She wasn’t baptised in the bath that evening. Still, nine months later, after a few conversations here, a couple of visits to church there, some praying with Tim and some Christian women, long conversations with her grandmother during the summer holiday about Christianity and gender equality, Tim’s girlfriend Rachel led Becca to Christ.

It happened on the fourth evening of an Alpha course. Tim was away, but not being there actually felt like a gift from God. God, he felt, was reassuring him that whatever he called him to do, the results would never be up to him.

We turn our hearts to God, we make our plans, we do what we believe is ours to do but it is he who acts in glorious sovereignty over it all. It is he who woos people to himself. As Paul puts it in 1 Corinthians 3, ‘So neither the one who plants nor the one who waters is anything, but only God, who makes things grow.’

What strikes you about Tim’s approach? What biblical connections do you see?

As you reflect on your frontline, can you see ways God has been at work over the long term? 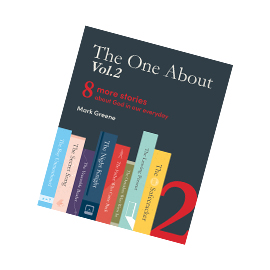