Discover something new this Saturday

The Spirit of Assurance | The Holy Spirit

Word for the Week New Testament

But when the set time had fully come, God sent his Son, born of a woman, born under the law, to redeem those under the law, that we might receive adoption to sonship. Because you are his sons, God sent the Spirit of his Son into our hearts, the Spirit who calls out, ‘Abba, Father.’ So you are no longer a slave, but God’s child; and since you are his child, God has made you also an heir.

That damp, grey November morning, Darren and Steve were thawing out in the factory gatehouse where they worked as security guards. Steve was complaining how much he’d had to shell out for his stepson’s new football boots. ‘Ninety quid!?’ exclaimed Darren. ‘He’s only nine! He’ll be too big for them in six months.’ Steve, clearly startled, defended the purchase. ‘But his best mate’s got the same pair, and he really wants them.’ Considering Steve was always banging on about how broke he was, Darren couldn’t believe it. But he was pretty sure what was driving Steve’s behaviour: Steve desperately wanted his stepson to accept him, so he made financially reckless decisions in an attempt to secure the relationship.

Insecurity is as powerful as it is old. In Galatians, Paul was writing to Christian communities who, despite tasting the sweet freedom of the true gospel, were ‘turning to a different gospel – which is really no gospel at all’ (1:6-7). False teachers were throwing them ‘into confusion’ (1:7) by insisting that if these Gentile Christians really wanted to be considered God’s people, they needed to strictly follow the whole Jewish law (Torah).

Incredibly, these Galatian Christians were chomping at the bit to follow this false gospel. But why? These stringent laws, including circumcision and dietary restrictions wouldn’t have been particularly attractive elements of Judaism to Gentile believers.

The answer is perhaps explained by their pre-Christian beliefs, which may have led them to think that any minor infractions could incur the wrath of their gods, and thus left them willing to do anything to avoid this. Though they had crossed the border from pagan religion into God’s kingdom, they did so weighed down by a backpack of insecurity.

Whatever the reason, Paul is having none of it! God has no interest in manipulating our insecurities to make us more pliable. Nothing could be further from the truth. God longs for all his children to live lives of love and faithfulness within the secure embrace of his love and approval. He sent his Son to make that a reality, and his Spirit to assure us of that reality. It’s only by the Spirit we can call the God of the universe ‘Abba, Father’ with confidence.

Throughout this week, make this your prayer: Father, by your Spirit, help me know I’m yours. 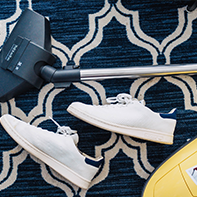